Our new Cielo or Sky Shade as they will be known in future are a unique two tone colour for a reason.  The Sky facing panels are Light Grey because this colour fabric resists UV and Sunlight the best, were the Dark Side Panels add contrast and show the dirt less from grime thrown up by passing vehicles and the like. 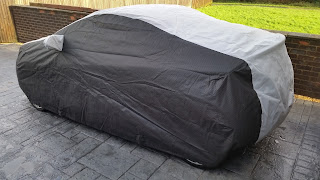 The roll out continues on Coveryourcar with new patterns being added every week.  These are custom made, bespoke covers for the price of a semi tailored equivalent.

They are made to order here in the UK and currently take 4 weeks to produce and deliver due to the volumes currently in production for individuals and vehicle manufacturers worldwide.

Car Covers - That Time Of Year!

Quite often at this time of year customers will think their car cover is leaking because they will find moisture on their car on certain days whereas in reality its due to heavy, damp air, passing through the breathable car cover fabric and condensing when it hits cold metal car body surface. 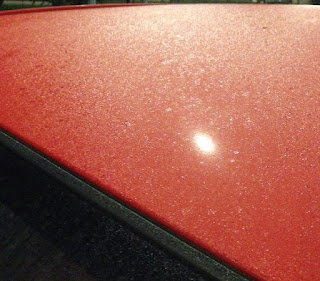 This is best seen at night or early morning when cars in the street may be covered in condensation or a fine mist, yet its not even been raining.  This is exactly the same as what happens under a cover to a degree as the air can pass through the material both ways.

If you uncover the car early morning or late evening then it figures that you may see some of this condensation.

If you uncover the car around mid day when the temperature has risen slightly then you wont see any as any moisture will vent off through the cover, passing away from the car.

So don't panic, your cover isn't leaking, its just a natural phenomenon that occurs in nature.

1) Park away from plants, shrubs and trees which tend to attract moisture on certain evenings

2) Park on a hard surface, not soil or grass or something which will hold moisture which will then rise under the cover.

3) Park so that the covered car is in early morning sunlight, this will speed up the venting away process.

4) Remove the cover regularly to dry it out and let the car breathe naturally.

Also if you cover an  open car, dont expect the cover to keep the condensation out, no cover will.  you will end up with moisture on seats and dash, dont forget a cover is not a garage.

Visit us today at CoverYourCar.co.uk for the best choice in Waterproof and Breathable car Covers

Putting your car away in storage this Winter?

If you are putting your car away for Winter, either in storage or under a cover, we would highly recommend using one of these to keep any mice or rodents out of your car as the damage they can cause can be catastrophic. They eat through wiring, seat belts, seats, carpet the lot. Powered by a 9v battery they work for months at a time. Contact us for details on 01744 633985 or buy online here 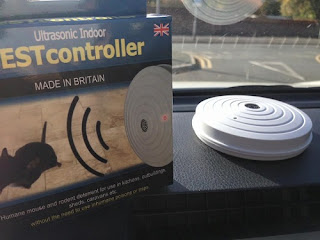 The Pest, Mice and Rat Controller emits a 40,000 to 42,000 Hz ultrasonic signal every 8 seconds to protect an area approx. 2500 Sq Foot, unobstructed. Pest Controller is totally safe.  Pets, and other wildlife remain totally unaffected. If not entirely satisfied, Pest Controller is guaranteed for 12 months. Installed in minutes - Operates continuously with a PP3 9v Battery, for approx. 4 months.

Bans Mice and Rats from your car and garage... FOR GOOD!!

Permanently banishes Mice and Rats from your car
Completely harmless - deters Mice and Rats
Totally Safe - For Humans, Pets and other Wild Life
Environmentally friendly - No more poisons or traps required
Emits a 40,000 to 42,000 Hz sonic signal every 8 seconds to protect an area of up to 2500 sq. ft
Installed in minutes - Operates continuously for up to six months before new battery is required
Maintenance free